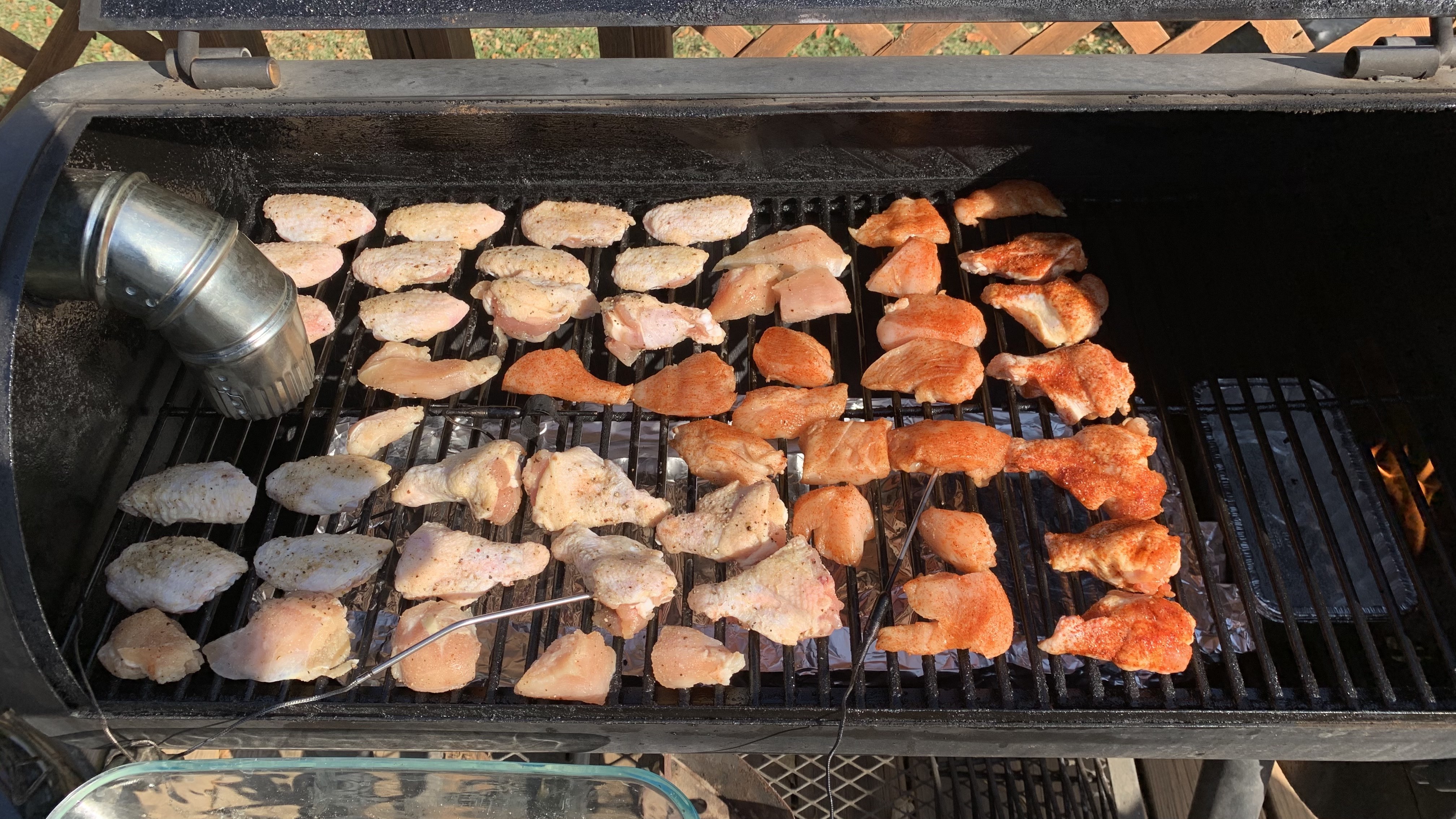 I cooked up wings for myself, along with some boneless wings for my wife and kids. I also prepped the kiddos wings just as simple BBQ using Killer Hogs The BBQ Rub, which you can now pickup at Walmart.

I mixed up my own rub for this one. It was a garlic ginger rub. I wanted to add to the Asian theme from the sriracha, which is why there was garlic ginger, along with a few other things in their, too.

This rub was really good. It smelled great and tasted great. It worked well with the honey sriracha sauce I wipped up. It didn't exude Asian, but it was delicious nonetheless.

I didn't have any coarse ground pepper on hand, so I had to grind it fresh. This made it only slightly a bit spicier than I had expected, along with some more peppery flavor, too. It wasn't bad, just not sligtly off balance.

Also, after a few failed rubs, I didn't want to blow our tastebuds away with the ginger. I was a little lighter with the ginger than I needed to be. That meant the ginger was very subtle in the background, instead of it being a dominant flavor like a "garlic ginger" rub would suggest.

So, what did I think? I think this rub was a good start. (Definitely lightyears ahead of my two failed batches.) That said, I won't't use freshly ground pepper again, or we I do, I won't use quite as much. I also will up the amount of ginger in the rub in order to make it amore domininant flavor.

A;l in all, I'll definitely use this rub again, and I'll update you on how that turns out. I give the rub a solid

I also made a honey sriracha sauce for these wings. I actually based the recipe off of this one at Sauce Fanatic.

Here's what I changed. I browned the butter before I added the other ingredients. I wanted to add a little more depth of flavor to the sauce. Based on what we had on hand, my butter was salted and soy sauce reduced sodium. I also added some liquid smoke to make it a little smoker. Here's what I did:

It was quite tasty. It wasn't too spicey at all, even my wife liked it. (She doesn't like spicy food like I do.) There was a sublte smokiness from the liquid smoke that was very nice.

I don't think I browned the butter enough. I was rushing to get it done before the kiddos got up, and so next time I'll definitely give myself more time to brown the butter properly. It was slightly too sweet for my taste, and so I'll probably reduce the honey a bit and up the Sriracha a tad as well. Finally, I would've like a bit more smokiness, so it needed a bit more liquid smoke.

Overall this is a really good sauce. I will definitely be using it again, with the changes I indicated above. It wasn't quite a smoking hot recipe, but oh so close. In the end a

I got the offset smoker going really well!

The Prep
I prepped too much food. This is the first domino of failure, but I didn't fully realize it until I got ready for frying.

The Smoke
This worked pretty well, but the wings didn't get smokey at all. Partially because I couldn't keep the smoke going as I was getting the other steps prepped. They were on for only about 30 minutes before they reached 130°, and then I had to pull them off so they wouldn't get overcooked when I fried them.

The Fry
This was a complete failure. I was too pressed for time and space. I didn't have enough frying space to fry all the wings in a reasonable time. So, I had to call an audbile and fire up my electric smoker to bake most of them.

I used cornstarch mixed with some of the rub. How much? I didn't measure. I just added enough to tell that there was rub mixed in.

I couldn't dip them properly because I had too many wings (real and boneless) and not enough time. Supper was fast approaching! The batter was too thck and goopy on the wings, especially noticeable for the ones I baked. They looked terrible and their consistancy was also terrible. But they still tasted good!

The corn starch was a bad choice for baking the wings, but it was a great choice for those I did get a chance to fry. They were extra crispy, but I was only able to fry up 3 batches of wings.

The Double Dip
This too failed. I mismanaged the fire in my Jumbo Joe, and so the flattop wasn't hot enough by the time I threw the few wings I was able to get done. Got some carmelezation but not what I wanted.

Over all this was too much meat not enough time. It was terribly executed. Too many moving parts that I couldn't manage on my own. I have the feeling this would've been great had I planned and executed a smaller batch. They would've been smokier, cripsier, better battered, and doubled dipped. They may have been tasty albeit exectued exceptionally poorly. Because of all these miscues the cook got an up in smoke (

Managing expectations. That's what I learned. With a growing family, I tried too much. If I go smaller scale with this, it would be easier to handle. Also, I won't try and fry so much without having the necessary equipment. I will also tweak the breading to account for baking.

They tasted great and we ate all the leftovers, so not a complete fail. I fail on the cook, but the flavors were all really good and almost perfect. On the whole, this recipe is smoldering (

), but soon I should be able to get it to smoking hot (